by Muskaan Shrivastava
in Marketing
0 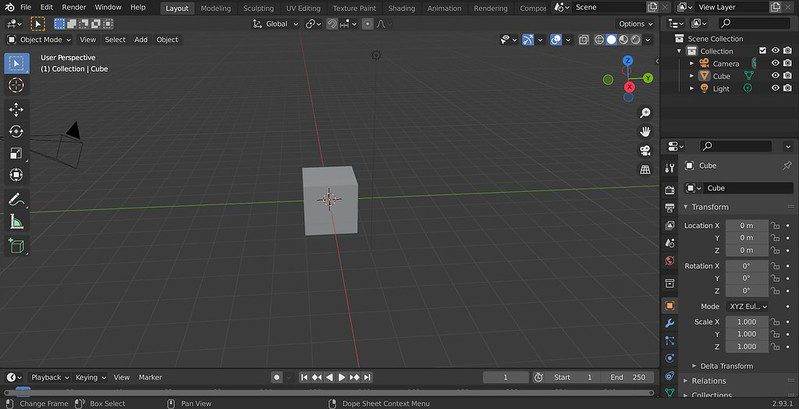 By: AndLikeThings/Flickr @All Rights Reserved

Blender is a free and open-source programme used by a variety of graphic and visual effects artists to bring their dreams to life on computer screens in 2D and 3D. Since 1998, the Blender Foundation has been creating and maintaining this software.

This tool can be used by many professionals who work as modellers, texturing, skinning, bone movement, skeleton, rendering, rigging, simulation, motion graphics, videogame, and movie VFX artists to learn about the project pipeline, and adding this skill to their resume can help them get more job opportunities in this field.

Because of its user-friendly interface, which offers both 3D editing mode and script-based editing for efficient and high-quality data output, this application is preferred by video game and animation creators.

All of the necessary settings and presets, as well as the most relevant plugs, are included in the tool. Blender is pitted against similar programmes like Adobe MAYA, 3Ds Max, and others.

The Origins of Blender Software

Ton Roosendaal co-founded NeoGeo, a Dutch animation company, in 1988. NeoGeo expanded swiftly to become the Netherlands’ largest 3D animation studio and one of Europe’s best. For big customers, such as Philips’ worldwide electronics corporation, NeoGeo created award-winning projects that were screened at the European Corporate Video Awards in 1993 and 1995.

Ton reworked the application and built Blender, a 3D software, in 1995.

As NeoGeo continued its amazing effort to refine and expand the Blender tool, Ton realised that its utility could be expanded outside of NeoGeo and used as a tool for other animation artists.

NaN was formed with the goal of developing and sharing a free, cross-platform 3D application.

At a time when most commercial 3D software costs thousands of dollars, this was a novel concept. On a technical level, NaN sought to deliver 3D modelling and animation software into the hands of the general public.

NaN’s business model included the provision of commercial goods and services in the Blender area. NaN attended the first SIGGRAPH conference in 1999 in an attempt to spread Blender further.

Blender’s first SIGGRAPH convention was a big success, gaining a lot of press and participants’ attention. The Blender was a big hit, proving the machine’s enormous potential!

The NaN (Not a Number) was able to raise EUR 4.5 million in venture capital funding following the success of the SIGGRAPH conference in early 2000. NaN was able to extend its operations very immediately as a result of the massive money inflow.

Blender Software: Who Can Make Use of It?

Blender has a wide range of capabilities that allow it to be used for almost any sort of media production. It is used by individuals and studios all around the world for amateur projects, advertising, and feature films.

Blender provides two independent binary packages to download the software; depending on your needs, you can choose between a stable release and a regular build.

The first is more stable, but the later provides the most up-to-date functionality at the expense of stability when new features are added.

Blender is a free software programme that runs on Windows, Mac OS X, and Linux. Ensure that the graphics drivers are up to date and that OpenGL is properly supported on a regular basis. Blender, like any other top tool on the market, has a set of minimal and suggested criteria, so be sure these are met, at the very least to the minimum level, before attempting to install it.

Installing on a PC

To select the best appropriate specification for the Blender’s installation, we must first determine the minimum criterion that can be met to meet the Blender’s requirements, according to our methodology.

We can also go to Blender’s website to double-check the minimum requirements and download the blender version that best suits our needs.

We’ll need the blender windows zip file because we’ll be installing it on a Windows computer.

Install with the Windows Installer

We may pick where Blender should be installed and configure Windows to add a Start menu entry and view Blender blend data when we run the Windows installer. To install Blender on our PC, we need administrator access.

Install from a Zip File

Before double-clicking the programme to run Blender, we must first manually uninstall Blender from the selected folder.

Blender does not require an installation or administrator rights to be added to the menu. Many versions of Blender can be installed without conflicting with this option because they are not installed on the device.

Install the Blender Software from the Microsoft Store

The Blender software can be downloaded via the Microsoft Store as well. It’s also simple because we only need to search for the tool and click the install button.

Blender may now be launched from the Start menu on Windows.

The blender is launched every three months or so. We can read the release notes to stay up to know on new upgrades.

The Daily Builds functionality of Blender binary distribution is updated on a regular basis to reflect the most recent development enhancements made by the development team in response to user feedback and requests.

These versions have not been extensively tested and may split, despite the fact that they are not officially and generally not highly experimental.

Whether it’s a new stable update or a normal build, the installation technique is the same.

How does Blender Software make working so easy?

For a number of reasons, the Blender software is easy to use. We’ll see one after the in-lists.

What is Blender Software’s purpose?

Blender is a free to download and install 3D open-source software with support and add-ons based on our project requirements for VFX, such as probes, texture, lighting, colour corrections and balancing, effects, rigging and rendering, and more; gaming, with its Blender game engine, probes, and game rules that can be added via Python scripting; and engineering demos of machine performance for client presentations, among other things.

All of this supports artists, animators, and developers in executing 3D-related work responsibilities in order to provide the best possible user experience in games and movies.

Blender is free for students and learners, although the majority of comparable apps on the market are subscription-based.

What are Some of the Things You Can Do With Blender Software?

We can use a blender for a variety of reasons based on the project procedure outlined below:-

The user interface is similar to other 3D working software that works with data in lines, nodes, and polygons. Modeling, texturing, lighting, rigging, beautiful ultra-realistic rendering, cam handling, colour tweaks, skinning, stimulation, effects, and a variety of other tasks are all possible for movies.

Blender’s game engine may be used by gaming artists to swiftly design concepts, and python-based scripting can be used to configure the game’s stages, rules, and other elements.

Why Should We Use Blender Software?

On the market, Blender is free, whereas comparable software for the same workflow requirements is costly. For beginners and expert users alike, the interface is straightforward and user-friendly, allowing them to operate quickly and effectively with shortcuts. Smoke, dust, body movements, joint moments, waterfalls, gravity, and other visual effects are created. With the blender software, all of this is simple to accomplish.

Presets and templates help in the creation of a model that is quick to unwrap for texturing, allowing work to be accomplished in less time. Stimulation and keying for the time frame can be done in less time by watching the animation movement. The preview option is available while creating engineering new design workflow presentations.

The blender service team is in high demand since it collects and enhances software based on client needs and requests. Between 1998 and 2019, the blender software development team updated the application to ensure that it fulfilled industrial and professional standards.

What is the purpose of Blender Software?

It is the only free solution application with the best user-friendly interface that allows new and experienced professionals to understand and comprehend many concepts in 3D data processing and attributions.

What Role Will Technology Play in Your Professional Development?

Assume someone wants to work as a VFX artist, a game artist, a graphic designer, or any other 3D design and development job for the visual experience audience. Blender can help people learn, create, and deliver work to clients in a clean and transparent manner in this scenario. Blender is used by a lot of games and graphic firms, thus there are a lot of career opportunities.

Blender is the only free solution for installing and studying 3D design, visual effects, and gaming-related concepts, all of which are rapidly evolving. Beginners and experts can both benefit from learning this to improve their abilities and gain a better understanding of the 3D artist or design profession.

In terms of professional modelling, texturing, technological features, and other factors, Blender is compared to similar applications. Because of the study and practise, you will be able to get work as a Blender artist and in a few other relevant fields.

Blender is now free and open-source software created by the 24 employees of the Blender Institute, which was founded by the Blender Foundation.

Easy! How to Upload Video on YouTube From iPhone

Top 7 Things You Can Do With a Laser Engraving Machine

Top 7 Things You Can Do With a Laser Engraving Machine

Can You Use PS5 Controller On PS4: Best Guide on PS5