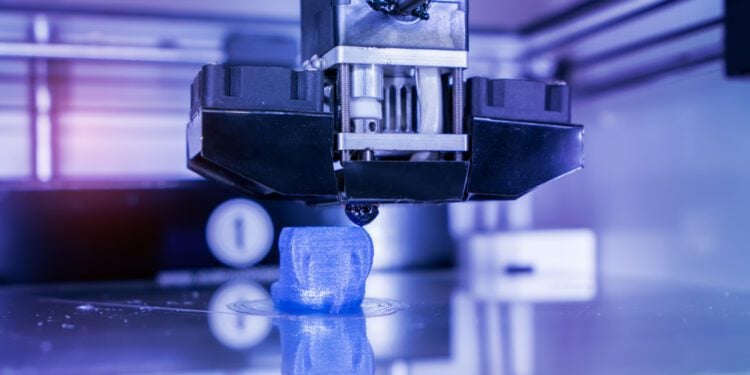 A picture by asharkyu, Shutterstock, Copyright-2021

DIY 3d metal printing was never so much fun before!

3D Printing has emerged as one of the most game-changing technologies in recent years, and certainly, this is the most appropriate time to get your hands-on on it. 3D Printers came into existence a few decades earlier, in 1971.

Due to increasing availability and advanced features, the metal 3d printer has become more popular. Today, you can easily DIY (Do It Yourself) with the help of compatible 3D printer kits.

Metal 3D printing has grown considerably in recent years, with many enterprises and startups implementing these 3D metal printing processes with the help of more compatible materials.

Many improvements have been made to 3D metal printers in modern times. Various innovative projects like Metal deposition and Hybrid systems are meant to function the process more effectively.

Welcome to the Infinite World of Metal 3D Printing!

One can use Metal 3D printing in the aerospace and automotive sectors to create finished parts and tool components. 3D printing can produce rocket motors and aircraft components that are well defined in saving weight and reducing cost.

Metal 3D printing is also hugely popular in medical industries, which allows the printing of sophisticated metal parts for a comparatively lower price in conventional manufacturing methodology. 3D metal printing also has a huge impact in the medical sector, especially in creating implants in the dental sector.

Metal additive materials are also used in the marine sector to manufacture boat propellers. In this article, you will learn about metal 3D printing, the main components involved, the applications of metal 3D printing, and the DIY 3D metal printer.

How to DIY 3D Metal Printing!

One of the most cost-efficient 3D Printers is the DIY (Do it yourself) 3D Printer kits. Irrespective of the fact that assembly of such 3D printers requires some patience and some basic DIY skill sets, these can be the best ones if you intend to understand the mechanics of these marvelous pieces of technology.

All the DIY 3D printer kits are available at the various market stores that you can handpick. These kits have to go through strict quality control and ensure that every product delivered to customers has gone through intense quality testing, like verification of raw materials used to make the kit, safety tests conducted on circuits used, and inspection of final products before delivery to customers. For DIY printing, safety risks should always be in mind because of the extreme temperatures in the platform.

Most of the 3D metal printers are more expensive than the consumer-friendly plastic 3D printer. But I must reckon here; patience is the key! Industrial companies mostly use metal 3D printers; still, if you own a desktop 3D printer in your home, you can easily be able to configure your existing machine to DIY 3D metal printing.

What is Metal 3D Printing?

Selective Laser Melting (SLM) is also considered one of the most popular metal 3D printing technology easy-to-use systems. SLM was developed in almost the same timeline as DMLS at the Fraunhofer Institute for Laser Technology in Aachen, Germany. In this article, the term metal 3D printing refers to both processes in general for better understanding.

How Does DMLS Work?

3. The build starts with allocating a thin layer of loose metal powder to the build platform. The higher laser power starts its path for a given layer, finally sinter the powder into a solid. This process of allocating a layer and sintering continues till it produces parts.

4. The adjoining loose metal powder is detached from the printer after the part becomes normal. This final step of the DMLS process includes the removal of support as well as post-processing.

How Does SLM Work?

4. SLM process utilizes to fortify small angles and hangovers of the parts, but the design should be stuck to the tray. The support is detached manually after cooling.

5. The surface finish of the sintered metal parts is left rugged and hence needs some post-processing. Finishing technique like thermal treatment is generally used post-printing to accomplish the functional necessities to produce metal parts.

Also, the fabrication process for both types of 3D printing is almost similar. Both implements a laser to scan and melt the metal powder particles simultaneously. They finally bind them collectively so that a part of layer by layer can be built. Other than this, materials invoked in both processes are metals, particularly in granular architecture.s.

What is the difference Between DMLS and SLM?

3. DMLS implements high temperatures to cause the particles to melt and hence join together fully. Melted parts become completely solid and hence don’t need any heat treatments. Whereas SLM uses a blend of pressure and heat so that particles can stick together. Sintered metal parts have a high void fraction and need heat treatments to be stiffened.

However, SLM and DMLS are technically different processes, and the printing industry uses both in terms of productivity, but still, most metal 3D printing companies use DMLS instead of SLM.

Binder jetting machines are ideally much bigger than powder bed fusion machines, and hence objects can be placed to use the totality of the build chamber. That’s why this is considered a favored choice for medium-level 3D production.

Binder jetting can also handle more metal materials like sand, ceramic, and full-colored objects. Since such machines work at room temperature, warping does not happen, and supports are not required.

The main shortcoming of metal Binder Jetting is that due to the implementation of composite materials and binding techniques, the material characteristics are not often appropriate for structural parts, which is considered unsuitable for high-end applications.

However, the material properties of the produced parts are almost similar to the complex metal parts produced with Metal Injection Molding, which is one of the most popular manufacturing processes for producing metal parts.

How Does Metal 3D Printing Work?

The basic fabrication process for DMLS and SLM are almost similar. Here is how fabrication in metal 3D printing works:

Aluminum, mainly in alloy form, is the most popular material in metal 3D printing, which shows excellent mechanical properties. Aluminum is considered very worthy since it provides great resistance and is much lighter than other materials used. It is primarily implemented when keeping weight down is much needed, like in aeronautics and automotive industries.

Steel is another important material used, specifically in industrial uses. Steel provides great material properties and a spectacular surface finish. Considering this, it is the second most popular metal used in 3D printing after Aluminium.

Precious metals are primarily used in jewelry, but due to their high cost, gold, silver, and bronze are all used in 3D printing to make sophisticated kinds of jewelry. There is also metal such as cobalt chrome and Gallium, which is used in the medical industry. Also, titanium is sometimes used for corrosion resistivity, and bio-compatibility is impressive for medical applications.s.

Post-processing is one of the most important techniques used to enhance the mechanical attributes, designing, and accuracy of the metal printed parts. The post-processing technique consists of the removal of the support structures and the remaining powder. Thermal treatment is generally implemented to remove the unnecessary stresses so that the part’s mechanical properties can be improved.

Due to the immense popularity of 3D printing nowadays, there is cutthroat competition between manufacturing companies. Metal 3D printer manufacturers use 3D Systems, which offer a full range of capabilities in rapid prototyping.

Various new manufacturers have made an appearance in the market which provides metal 3D printing at lower costs than the large industrial manufacturers. Desktop Metal with their Studio System and Production System for 3D printers are such companies that give consumers an impression that metal 3D printing can be cheaper in a real sense.

SLM Solutions has considered a pioneer manufacturer in the field of 3D printing specialized in SLM technology. SLM 500, SLM 280 2.0, SLM 280 Production Series, SLM 800, SLM 125, and NXG XII 600 are the product offering from SLM Solutions in the market today. These metal 3D printers are based on Direct Metal Laser Sintering technology. Bidirectional coating and multiple laser options are used to create complex metal parts by stiffening the metal powder from one layer into another.

EOS is an additive manufacturing company based in Germany, which was founded in the late ’80s. The company has launched a range of DMLS 3D printers. EOS M 300-4, EOS M 400, and EOS M100 are currently ruling the market. EOS also makes an appearance in polymer 3D printing with a domain of various SLS 3D printers.

Arcam A2X with a building volume of 200 x 200 x 380 mm and a weight of 1.7 kg was introduced for the aerospace industry to manufacture complex metal parts with immense strength. Founded in 1997, Arcam has spearheaded 3D printing with the specialty of Electron Beam Melting (EBM) technologies and is still only used by them. Arcam has four metal 3D printers on the market currently. Enters can give you the most satisfying experience in metal 3D printing.

A piece of wise advice!

The infinite capabilities and possibilities have been intensified ever since 3D printing has become more popular and available to the common consumer. Accessible industrial materials available on the market make metal 3D printing easier and cost-efficient for advanced and functional prototypes.

A DIY metal 3D printer can give you a more enthralling printing experience. With your time and creativity, you can conquer the world when you finally delve into the fascinating world of metal 3D printing.

I hope this article on metal 3D printing made you satisfied and curious at the same time. Any feedback is warmly welcomed and honestly looking forward to your valuable comments.

How to Speed Up Computer for Better Performance: A Detailed 101 Guide