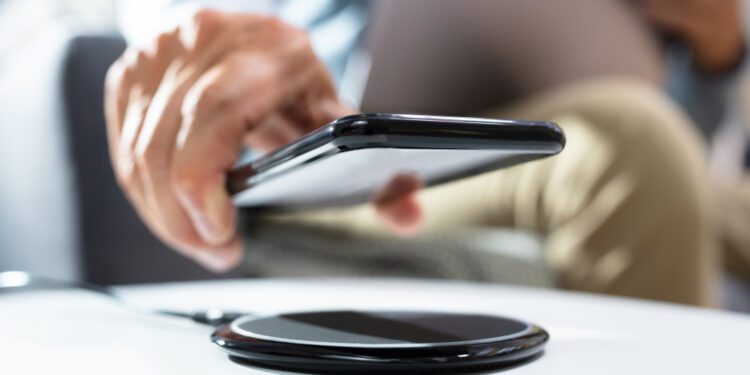 By: Andrey_popov on Shutterstock

101 Guide on How Does Wireless Charging Work?

Want to know how does wireless charging work? Read this post.

Electronics have become an integral part of our day-to-day lifestyle. We use them to make difficult tasks easy by using them to complete certain tasks. Electronics are usually automatic, which means that they provide faster completion of any task with usually minimum effort applied by the humans. However, when it comes to maintaining any electronic item’s condition, it sometimes consumes way more effort and time than expected.

Although this method may look complicated to a few, it isn’t that complicated when you compare it to the previously existing methods to charge any item. However, to make the charging part even easier, some inventions such as power banks and batteries with bigger capacities supporting fast charging came out.

As time went by and the electronic companies kept developing power banks and batteries further to upgrade them, some companies came up with the idea of wireless charging, which meant that any supported electronic item could be charged using chargers that are wireless.

This invention turned the world of electronics completely and the prospects of this project happened to be bright at that moment.

So we request you to keep reading this article to the very end to get the best answer to your question and get an in-depth analysis of wireless charging technology.

How does wireless charging work?

What happens during wireless charging?

This magnetic field is then recieved by the device’s copper coil, which in turn induces a current that passes the current through a power rectifier to the battery of the smart phone and thus charges it.

Another famous standard for wireless chargers is Airfuel alliance resonance which allows the compatible device to receive charging even if it is 5 centimeters away from the charging pad/charger, unlike other wireless charging standards like Qi which won’t charge the device unless it is kept on top of them.

Apart from these charging standards, other companies provide better wireless charging solutions that allow the user to wirelessly charge the device from bigger distances, unlike the previously mentioned standards(Qi standard or Airfuel standard), which don’t go beyond the charging pad or few centimeters away from it.

As mentioned earlier in this article, the future prospects of this type of technology seem to be very good; hence, many companies are working on this technology to develop it further for a better user experience. In the future, people will be able to charge their vehicles through wireless charging even if their vehicle is parked or is in locomotion through power delivery services that would be set up like mobile network services today. This type of charging will reduce our dependency on fossil fuels and help in sustaining a better environment.

However, the current day wireless chargers are not so efficient because nowadays there are fast chargers available that provide up to 200 watts (wired charger) of charging speeds, but the wireless that are existing in today’s date are just 5 watts which is equivalent to nothing when compared to normal chargers.

Such less amount speed results in depleting battery life because of excess heat in batteries and causes unwanted loss of energy. This low-power charging speed is enough to charge an apple watch, a few electric toothbrushes, or any other handheld device with a small battery, but it is not okay for devices with huge batteries.

This is a very fluctuating subject as the names of the phones keep on changing and adding to this list every time a new phone or electronic device is launched in the market. However, we have segregated some names of smartphones that support wireless charging as of Novmber 2021. The names of the phones and devices that support wireless charging and are Qi-enabled are provided as follows:-

The above-mentioned IPhones can be charged using any Qi wireless standard-based charger by aligning the charger with the apple logo.

Apart from the above-mentioned Iphones, wireless charging is supported in some other Apple devices too such as the Apple Watch and the Apple AirPods.

There are no other products by LG that support wireless charging too as of now (i.e when this article is being written)

Apart from the above-mentioned products, only the latest Huawei buds 3 supports wireless charging.

Xiaomi has been working to create many wireless products hence they have many products that support wireless charging too such as the latest MI earphones and smartwatches which are mentioned on their website.

Only the above-mentioned products support wireless charging under this brand as of now.

No other product supports wireless charging under this brand as of now.

No other product was found to have a wireless charging feature in the above-mentioned brand as of November 2021.

The above-mentioned brand does not have any other product that supports wireless charging as of today’s date.

What are some best wireless chargers that can be used?

There are quite a few wireless chargers that fall under various segments that can charge compatible phones wirelessly. The names of the chargers are mentioned as follows:-

1) Apple Magsafe charger and Magsafe duo– These are apple’s official wireless chargers that use the latest magnets to charge Apple’s latest devices wirelessly. However, this charger may not be compatible with all the devices.

2) Aukey 10 W wireless charger– This charger is an affordable charger that comes with a TPU coating that prevents your phone’s slipping, and it has a 3 coil design that allows you to place the device anyhow on it.

4) Samsung wireless charging pad– This charger packs a mini self-cooling fan that helps the charger to cool down quickly as the wireless chargers tend to heat up quickly while charging any device.

5) Yootech wireless charger– This happens to be one of the simplest wireless chargers with a generic design in the market. However, this charger does not support fast charging.

6) Anker Powerwave pad and stand is a super cheap charger that iPhone users mainly buy. This charger does not provide a good grip for the phone.

7) Google pixel wireless chargers with a stand- This charger has a few LED lights that illuminate and can be used as a fancy charger in the dark due to this feature. Google assistant happens to work well with this charger as it manages a few of the features within this charger, like triggering a bedtime mode that toggles on Do Not Disturb. Later on, it even has the screen light up bright orange to mimic the sunrise just before your alarm.

There are some features in new-age phones like reverse wireless charging where the phone consisting of this feature will act as a charging pad and allow other devices to charge wirelessly from the backside of themselves. This type of feature may prove helpful in case of emergencies to transfer power to devices with no power at all.

Any wireless charging supported device can use a wireless charger of a different company for their smartphone or any compatible product. Still, as mentioned before, both the devices’ standard needs to be the same to work properly. The manufacturers of the charger and the phone are not supposed to be the same.

Recently, Xiaomi introduced a prototype of their upcoming wireless charging product that can charge any compatible device anywhere around it even if there are too many obstacles obstructing its way. In this case, the charger acts as a station that is sending some radio frequencies at certain speeds, whereas the receiver is the phone. This charger is called MI Air charger, and there is no initial cost for this product given by Xiaomi.

There is a rumor in the electric market that Tesla is one of the few companies showing their interest in using wireless power charging stations for their cars in the future.

How to Clear Disk Space on Mac – A Quick Guide