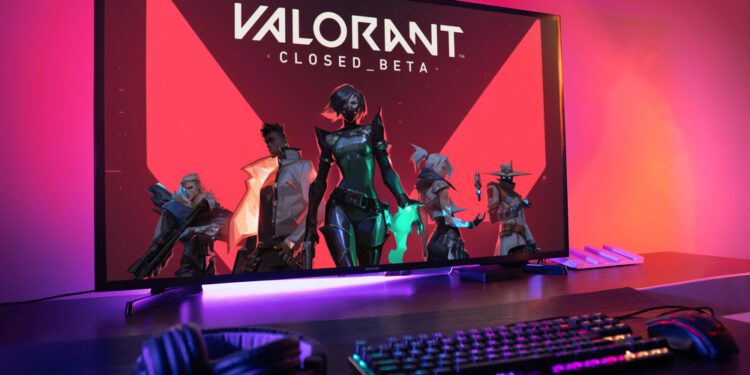 By: Cassiano Correia on Shutterstock

Before knowing what Valorant system requirements are, let’s learn about the game itself.

Valorant is one of the finest multiplier games, accessible only to PC with Windows, developed by Riot Games, which has also developed League of Legends. Valorant has different modes that can entertain players in unique ways with various agents.

Valorant currently has eight other maps that test the capability and IQ of both attacking and defending teams.

Agents are the characters the players have to choose from to play. Initially, every new player will have five agents provided by valorant. You have to unlock the remaining agents by earning points. These agents can be split into four categories.

Each agent has a different background and is unique in their abilities and character. Their voice lines are one of the special features and trademarks that Riot games have added to valorant.

A standard non-ranked mode in which the first team to win 13 rounds wins the match. And after the first two rounds, both the teams will switch their roles. Before the match starts, 2 minutes are given for each player to decide on what agent they’re going to play within the match. Players can discuss in written chat and voice chat throughout the entire game.

At first, the credits given to you will be less at the start of the match and after the switch. Eventually, it’ll increase every round based on your savings, amount of kills, and dead/alive in the previous game. You should be clever enough to know what you have to spend on? Sheild, Primary gun, or Pistols.

After four rounds, if a team loses the confidence in winning, they call for a vote, and if at least four players vote for the same, then Valorant declares the opponent as the winner. The problem is that this vote can be called upon once in half only.

A non-ranked mode in which the first team to win four rounds wins the match, and the team switches sides after the 3rd round. But every player has full abilities and has different guns allotted to them at the start of each round which players can’t change.

Agents are entirely players’ decisions. Winning rules are almost similar to that of unrated mode, but the time limit for each round decreases.

Instead of ultimate orbs in unrated, Spike rush has orbs with different purposes, such as increasing every player’s health point from the team.

Same rules as that of standard unrated mode with the addition of a win-based ranking system that assigns a rank to each player after five games are played.

Suppose both teams are tied in 12-12, then they’ll have “Overtime” where the player again switches sides, and Valorant will change their credits to 5000/-. They are supposed to play two rounds from both attacking and defending spawns.

If they still can’t decide the winner, Valorant will automatically evoke a vote that calls for “DRAW” or “CONTINUE.”

This mode is different as it was developed to practice the aim. Fourteen players enter the lobby and play for 9 minutes in this mode. Either the first to reach 40 kills first or the one to have the most number of kills when the timer ends wins the match.

Like Deathmatch mode, players spawn in as random agents, and can’t use their abilities, as the game mode is set for pure gunfights. But this is a team game.

In this mode, Abilities are pre-bought. Additionally, weapons and shields are reset every round. All the five players of either team will have the same agents they voted for after matchmaking.

It is a team deathmatch mode with 50 kills to win.

You can play with whatever you want and invite your friends to join your lobby.

The site where the players’ practice tactics, read shots, and plant and diffuse bombs.

I think that valorant has done a splendid job in designing skins for guns and melees. Especially the VFX of each skin’s finishers is so good, which would motivate any player playing to buy that skin.

The best trait is that it’s free to play. Unfortunately, it’s available only for Windows, gaining immeasurable popularity. One of the main reasons is that its system requirements are not very demanding compared to other fps games.

What initiative is taken by Riot games to guarantee fair play?

To prevent cheating and uphold the spirit of the game, Riot game has come up with Vanguard, an anti-cheat system that gets installed along with the game. It’s in charge of all misuse, abuse, and cheating with the help of 3rd party applications and takes necessary actions.

Although Valorant is free to play, its minimum requirements are not too heavy a graphical cost. However, to experience Valorant as intended, your Computer should meet the recommended needs of a Radeon R7 or Radeon R9 280 GPU to eliminate crashes and stuttering.

Compared to other PC games, the download file size is less, and its system requirements are not very demanding.

Valorant system requirements can be split into 3 FPS categories:

This game is too optimisable such that it can run on 30 fps, 768p on any pc possible, as most of their hardware would satisfy the minimum requirements shown below.

If you want to increase your gaming experience with the given pc specs, I have one tip.

Even though this decreases the graphics quality, it would increase the fps and gives a bit smoother experience with these system requirements. Also, to overcome lag issues, try to connect to a more robust internet and make sure other programs are closed by visiting “Task Manager.”

Although there are laptops that can satisfy minimum requirements, these are the recommended valorant requirements if you want to experience better graphics and smoothness of the game.

If you are really into playing valorant and are willing to buy the best Computer, make sure it satisfies the pc specs mentioned above.

If you are planning to be a better valorant gamer in your neighbourhood, I recommend you buy Laptops or Computers with High-end specs to play at 144 fps. Cause what is the use if you have a perfect aim and creative gaming approach, but you have a “Low Client FPS” warning and a massive game lag.

To wrap this up, please note that although it is free to play, it still doesn’t support cloud gaming or virtual machines. Happy Gaming!!

I hope this article has been of great help to you and you have understood everything you needed to know about Valorant system requirements, and also about the game play.

If there’s anything you feel we have missed out on, kindly let us know. We would be more than happy to help with further.

You can write to us through the comment sections.

Also read: What is Omegle

How to Download Music from Spotify: Best 101 Tech Guide

How to Download Music from Spotify: Best 101 Tech Guide

How to Split Screen on Android: Best 101 Tech Guide