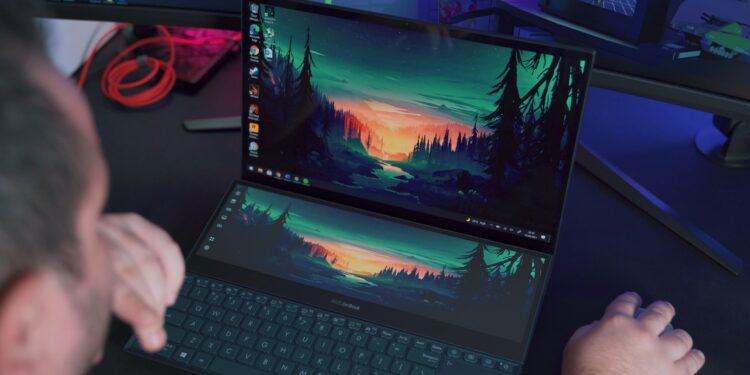 Photo by Onur Binay on Unsplash/Copyright 2022

With more people working from home and students taking online classes, the benefits of having a main screen with a second screen are quite appealing to customers. Adding dual screens to your laptop, on the other hand, has a substantial influence on the go computing with mobility. The all-new Asus ZenBook Duo and ZenBook Pro Duo, two screens ultra-portable laptops, have been introduced by Asus.

The second screen of the ZenBook Duo 14 laptop, named ScreenPad Plus, is integrated into the laptop’s chassis for mobility. The only drawbacks of the Asus ZenBook Duo are the relocated keyboard and trackpad for changing the laptop’s secondary display. So, is the Asus ZenBook Duo 14 worth its high price? Are the benefits of the dual-display or the main screen with ScreenPad Plus outweighed by the ergonomics of the repositioned keyboard and mouse?

Let’s have a better look at the Asus ZenBook Duo.

Two screens laptops are becoming a craze, with several manufacturers jumping on board.

The dual-screen design with ScreenPad Plus seems gorgeous in such a small chassis, unlike its larger competitors. The performance is comparable to the competitors, and the cost, most crucially, does not represent a considerable second-screen premium.

2. Let’s Know Something About These 11th Gen Intel Core Processors

In conclusion, Asus ZenBook Duo 14 UX482 and ZenBook Pro Duo laptops show us an example of the future of laptops like these. These kinds of laptops might get bundled stylus, which’ll be a good thing. Throughout this review, I can surely say that I have mixed feelings because, for some, the ScreenPad Plus will be a great deal, but this laptop won’t feel like it for some people.

To find the price of this laptop, you can go through the sites of every other country like India USA, and go to the United Kingdom site or visit your regional site to check the pricing according to the place.

How To Clean AirPods in 3 Simple Steps: Do's and Don'ts